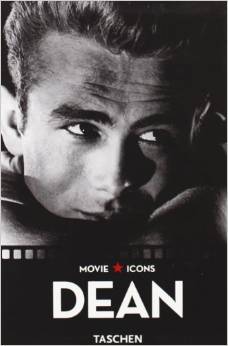 James Dean died at the age of 24, yet half a century later his mystique is unfaded. Had luck favored him that fatal evening, he might still be with us, an actor in the same generation as Paul Newman, Clint Eastwood, Gene Hackman, and Sean Connery. His phenomenally charismatic performances in such classics as "Rebel Without a Cause" and "East of Eden" have immortalized him as a cinematic great. Dean also had serious ambitions of becoming a writer-director, and it is haunting to imagine what he might have done if his life had not been cut short. He remains such icon of gifted youth: even 50 years after his death, we still look at James Dean in full suspense, wondering how he's going to turn out."The Movie Icon" series: People talk about Hollywood glamour, about studios that had more stars than there are in heaven, about actors who weren't actors but were icons. Other people talk about these things, TASCHEN shows you. "Movie Icons" is a series of photo books that feature the most famous personalities in the history of cinema. These 192-page books are visual biographies of the stars. For each title, series editor Paul Duncan has painstaking selected approximately 150 high quality enigmatic and sumptuous portraits, colorful posters and lobby cards, rare film stills, and previously unpublished candid photos showing the stars as they really are. These images are accompanied by concise introductory essays by leading film writers; each book also includes a chronology, a filmography, and a bibliography, and is peppered with apposite quotes from the movies and from life.